Mutellip Imin: Human Rights for the victims of Enforced Disappearances!

I Was a Victim of Enforced Disappearance for 79 Days 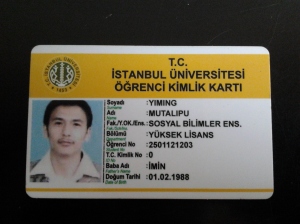 My name is Mutellip Imin. I am from Lop County in the Xinjiang Province of China. From July 15 to October 1, 2013, I was incarcerated by the Xinjiang police.
On the evening of July 14, 2013, I arrived at Capital International Airdrome in Beijing and went to the ticket counter to check in for my flight from Beijing to Istanbul. The ticket agent told me to wait and left with my passport. I was waiting for an hour until I was taken to the Airdrome police station where my backpack and PC were inspected. The customs agents told me that there were no suspicious items found in my belongings and that I would not miss my flight to Istanbul. I was, however, retained at the police station until two police officers came to inform me that I was wanted by the police in Xinjiang.
My passport, cell phone, Turkish residency permit, and my Turkish language proficiency certificate were all taken by the police, and I was handcuffed and brought to the repatriate center near the Airdrome. On the way, I begged the officers to let me contact my loved ones. They refused even to send my girlfriend, Atikem, a message that I was incarcerated. They told me I would be able to contact my relatives went I got back to Xinjiang.
After I was booked at the repatriate center, I was locked in a small room and put under surveillance. I was woken twice in the night, the first time to be fingerprinted and the second time to be taken to meet with some people from Xinjiang. They had my belongings in a mess on the floor and were reading a letter to my girlfriend. There was a Uyghur among them.
“Are you doing this in accordance with the law?” I asked him.
“Yes, we are doing this in accordance with the law,” he said.
“With what law?”
“The law of the People’s Republic of China.”
“What law did I break?”
“Someone will tell you when you get back to Xinjiang.”
On July 15, at around 6 am, we set off by plane on our way to Urumqi. I was accompanied by two Han Chinese and a Uyghur. They did not give their names or tell me what roles they had in the case. I assumed they were police.
It was about 1:30 in the afternoon when we arrived in Urumqi. I was brought to a room at the Ili Hotel, and the three men told me that if I was on my best behavior when the police chief was there, this would all soon be over. I saw them write, “Xinjiang Public Security Police Penal Spy, Second Detachment.” By their writing, I determined that they were from Xinjiang.
Later, the police chief came into the room with a stack of several hundred pages he said were about my case and distributed them among the three men. Then they forced me to give them the passwords of my cell phone, PC, email, Wechat, Twitter, Facebook, QQ, etc. They even demanded the administrator password of my Uighuronline website which I had created to bring harmony between Uyghurs and Han Chinese. As the password had changed when I was outside of China, I did not know the new password. They did not believe me and would continue to ask me for the password several times a day.
Starting on July 16, they took notes. They asked me mainly about my relationship with Ilham Tohti, how I knew him, and Uighuronline. I told them that I had attended his classes and helped him translate some news about Xinjiang from Uyghur and English to Chinese.
I was held captive and interrogated until October. During that time, the police never let me know why I was being held and were never clear on when I would be released. I was instructed to lie to my family, and rather than tell them I was incarcerated, I was to suggest that my disappearance was due to my own negligence.
On October 1, the police brought me my wallet, cell phone, and other things, but not my Turkish language proficiency certificate, Turkish residency permit, flash drive, SIM card, PC, or passport. They said those items would be kept in storage. In addition, they made me give them 1000 RMB. They gave me a new SIM card and the number of the person who would pick me up when I arrived in Hotan. My flight to Hotan landed around 6 pm that day. On the way home, one of the two officers confiscated my ID card as per the request of the police chief in Urumqi.
During my 79-day enforced disappearance, I lived in a state of constant torment. I was unable to contact my family to let them know of my whereabouts. All communication with the outside world was severed. My mother had a heart condition that I could know nothing about. I couldn’t talk to anyone, not even during Ramadan.